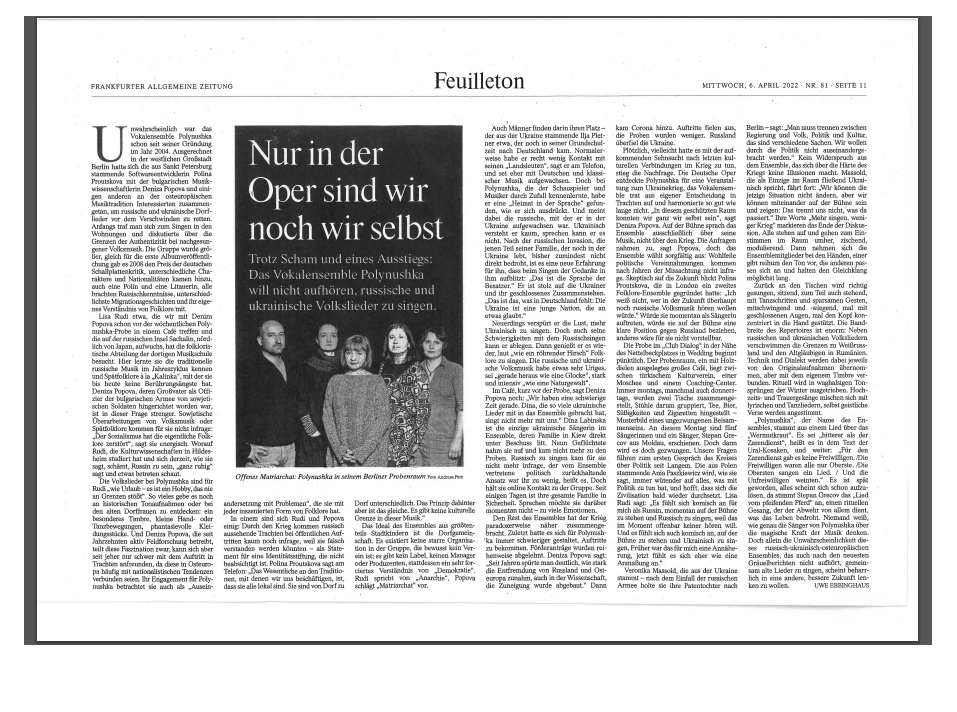 Polynushka proves to us whether traditional songs from the Ukraine and Russia are suitable for big cities.

Polynushka, translated means wormwood grass. The ensemble unites Ukrainian with Russian folklore and brings already forgotten traditions back to life.
Unlike most other groups that imitate the chants of the babushki, in Polynushka each individual keeps their timbre.

The ensemble can build on a wide-ranging repertoire. The songs and their origins are just as varied as the composition of the group. 7 women and two men from Russia, Ukraine, Siberia and Bulgaria form a unit in vocal polyphony.

When I heard Polynushka for the first time at a neighborhood festival in Kreuzberg, I was immediately enthusiastic and touched by the intensity that emanated from the voices and their interaction. What can be clearly heard through conversations: Polynushka doesn't just see itself as a bunch of mixed-up people who make music together. The members see themselves as a species surrogate family where you laugh, discuss, support, challenge and of course sing.

In focus is for Polynushka authenticity. A falsification of the ancient texts and melodies is out of the question. The old knowledge, the mythology and symbolism of the songs should be preserved and passed on. The songs are about fates. However, the existing feelings are usually not expressed directly but are hidden behind metaphors and similes. The understanding must therefore be worked out and the meaning behind it recognized. The texts, some of which date from pre-Christian times, deal with nature and the connection to the earth, with gods, animals and fairy tales.

When you hear Polynushka singing, the room vibrates. The members react, one to the other. The released thought is absorbed, pursued and further developed. The love for folklore from home is not only noticeable among the members, but the joy and energy is passed on directly to the people who listen to their songs.

Radio report by Torsten Möller on SWR2 about a concert of Heimatlieder from Germany in Domicil Dortmund as part of the chor.com. Music by Polynushka, by the ethnic group Gora, by La Caravane du Maghreb and by Njamy Sitson can be heard. Jochen Kühling, Sandra Stupar and Youssef Belbachir have their say.

Johannes Theurer (RBB, co-founder of Radio Multikulti):
Polýnushka is a complete exception. I don't know of anything comparable at all. In any case, for me it is a very big exception that people work with archive content in such a committed and well-founded manner and then also in the direction of the public.

Barbara Etz (film producer):
The young singers of the Polýnushka ensemble create cultural clashes that are intended. They perform, for example, in underground clubs in Berlin and London and at the same time in large concert halls, in front of ambassadors and politicians. They bring the Russian village to the western cities. There is a large fan base in Berlin that would normally turn away from folk music, but who find Polýnushka 'cool'. This ranges from wistful globetrotters to the colorful Russian community, to scattered punks and Berlin intellectuals to German-Russians of the 2nd and 3rd generation.

Hanni Bode (Deutschlandradio Kultur, music editor):
What is authentic about the Ensemble Polýnushka? It's the melody or the way of singing ... - this is very precisely modeled and also creatively implemented, just as the women in the village would do if the village were still the way it was.

Jan Brachmann (musicologist and journalist, Usedom Music Festival):
The members of the ensemble are not only musically trained, they are also scientifically trained. They collect the songs on their own trips or learn them by listening. Grades are not used. They are concerned with an authentic folklore, in which the original sound, the texts, but also the real-life context of the songs and stories should be preserved.

Ildar Kharissov (Composer):
This music takes me into another reality that is different from the one I earn my money with and I think that's wonderful.